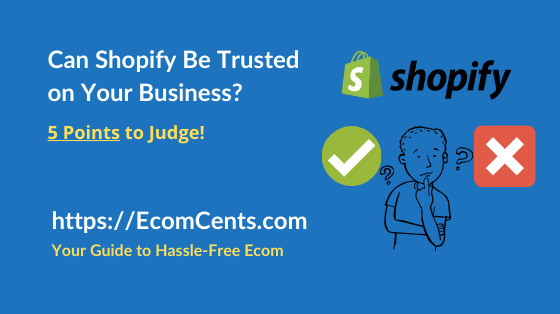 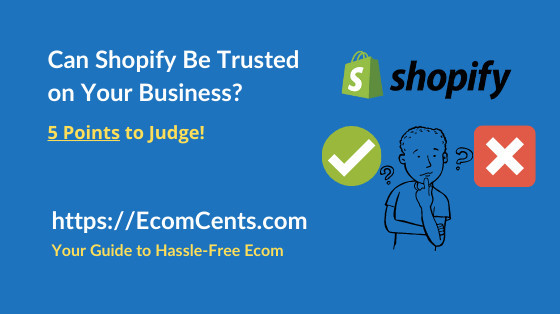 Can Shopify be trusted to build your business on it? Or can they shut you down and close your store and leave you out of business overnight?

Can you trust them for building a long-term business?

What makes Shopify better, or worse, than other platforms that allow you to build your store like WordPress, Wix, Amazon, eBay and Etsy? And is Shopify superior or inferior to any of these?

These questions and more I will be answering in this short article in order to help you make a decision in joining, or avoiding Shopify, and what to do instead.

Can Shopify Be Trusted?

Yes, Shopify can be trusted if you want to use it to build your online store and sell products and services online, as Shopify has been around since 2006, and they are still growing thanks to their continuous improvements on their platform and services.

There are more than one million stores that were build on Shopify, and many big business are using Shopify to build their online stores and receive orders, including Tesla!

Shopify has the right to close your store down if you do something that contradicts their conditions and terms of use, use it to receive payments to sell any of the prohibited items or services, or do anything that might be considered criminal or illegal, or do anything against their Acceptable Use Policy. 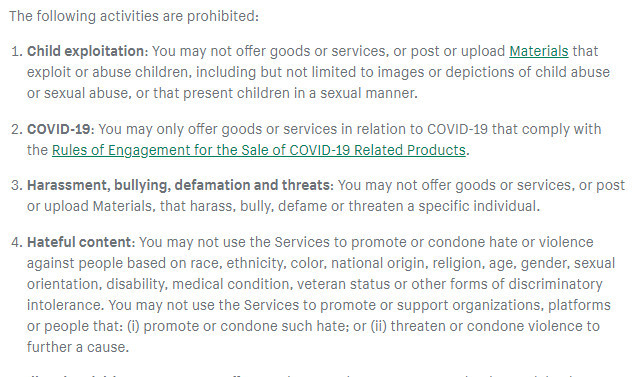 And that doesn’t mean that you can’t trust Shopify, because this is the situation for any other platform that allows you to build a store online.

Any other ecom store builder, online marketplace, or web hosting service might close your account and delete your website or online store if you do anything illegal, such as a copyright infringement, selling prohibited products or services, or just for not complying with their terms and conditions.

There are many reasons to consider Shopify a trustworthy company and platform to use, such as:

Shopify Is a Publicly Traded Company

Shopify’s stock is listed in different major stock markets like TSX & NYSE, and it’s stock price has been going upwards ever since it went public.

This is a good thing as it gives more stability and peace of mind knowing that the Shopify platform is handled by a company that has an established company with systems behind it that would make sure that the company has the vision to grow larger in the future, which cannot happen if they don’t make their main focus is to provide the best possible products and services.

And while that might be the case for many publicly traded companies, but what makes Shopify more trustworthy is that it is performing way better than their competitors such as: Wix, Square, and Lightspeed Commerce, especially in the past few years, thanks to the faster growth in the number of their users as they showed superiority over their competitors. 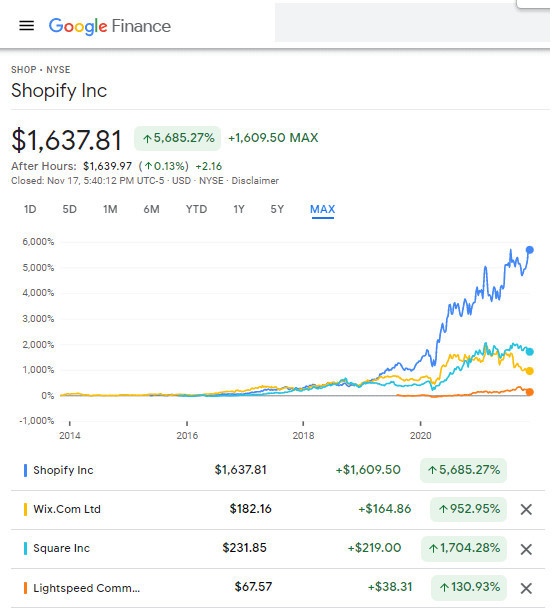 And the market cap of Shopify is currently around $210 Billion as of writing this article, compared $10 Billion for Wix for example!

Shopify is way ahead of their competitors in terms of quality and reliability of the platform, support, and development, and this is what made them exceed their competitors in the number of users who would stick to using Shopify, which increased their reputation that was reflected in the stock price.

The number of LIVE online stores that are built on Shopify continuously increases, and it comes from two groups of merchants:

And as a result, the volume of orders fulfilled on stores that were build on Shopify has increased significantly.

And as many business decided to go online in 2020 and beyond due to the pandemic, the growth of Shopify revenue and GMV (Gross Merchant Volume) has nearly doubled in 2020 compared to 2019.

At the moment of writing this article, it is estimated that more than 3.6 million LIVE Shopify stores are out there, including around 2.5 million US online stores. 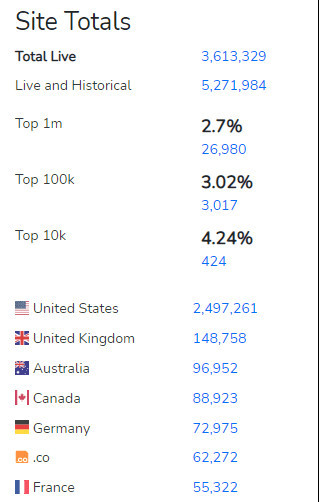 This is enough to show you that Shopify is trusted by many others and it is not going anywhere in the near future as the company has developed systems to maintain the current user base and to grow and accept even more merchants who would sell to more customers worldwide.

Shopify was mainly created to host ecommerce stores, which require bigger capabilities and resources than normal websites for small business or blogs.

Ecommerce websites should be highly secure as they will accept payments from users who would use their credit cards on them, and they must be reliable and fast-loading as they will receive a good amount of traffic in certain times, and they need to host high quality images, which are big in size and require high capabilities in order to load fast.

Without such big capabilities, an ecom store is destined to fail as people are not patient anymore and they won’t stay for few seconds waiting for a page to load.

And Shopify meets all of these requirements as it offers a great hosting infrastructure that is optimized for hosting ecommerce stores, unlike WordPress web hosting services that are mainly built to host small websites, or Wix that has a very low rating from users on Trustpilot.

Also, Shopify’s uptime is very high (99.99%), which means that hardly a Shopify store would go down and make you lose customers.

This is why you can trust Shopify to build your ecommerce store more than other platforms.

The reasons that Shopify keeps growing in revenue, number of users, and market cap is that there are systems in place not only to maintain the platform, but to keep improving on it and make sure that it always leads the market when it comes to offering what ecom merchants need.

Not only that, but they also invest in R&D activities and new assets that would make the merchants’ lives easier, like they did by creating the Shopify Fulfillment Network that allows merchants to ship their products in advance to Shopify’s network of fulfillment centers, so that the fulfillment centers would fulfill the orders on the merchant’s behalf in order to reduce shipping times and make the buyers happier.

Not only that, but Shopify allows partners to create tools like themes and apps that give Shopify stores certain features or functionalities that can be used by merchants to increase their Shopify store conversions and long-term success.

Not to mention that apps that help you find products to sell on Shopify without inventory and apps that make it very easy to sell your merch on Shopify.

Big Brands Are Moving to Shopify

Although Shopify is the best platform to start an online store for small businesses and beginners, but at the same time, they have capabilities to host online stores for the biggest brands in the world. 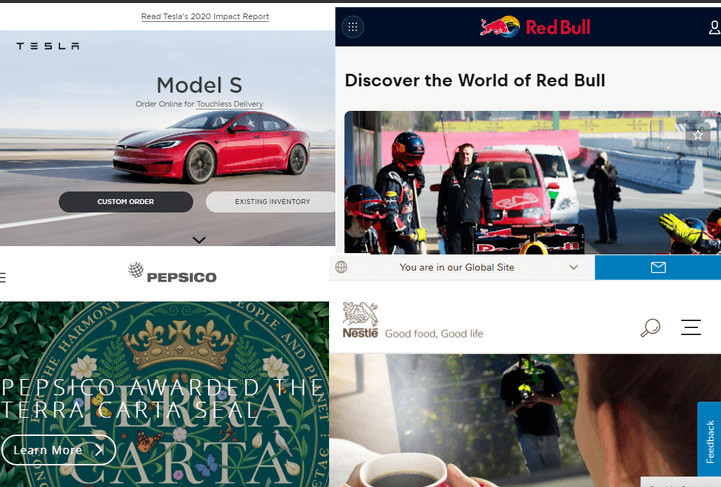 Tesla, Budweiser, Red Bull, PepsiCo, Nestle, Gymshark, Hyatt Hotels, and Fitbit are only few of the big brands that trusted Shopify to host their ecommerce stores.

What does that tell you?

Is Shopify Safe to Start your Own Ecommerce Site?

Based on the above five reasons, Shopify is a safe platform to build your own ecommerce site and start getting order from your customers, thanks to its reliability, speed, and ease of use that makes it great for beginners.

It is more reliable than most, if not all, other platforms that allow you to create an online store, as it was built mainly for merchants and businesses who want to sell products and services online, and it keeps improving in quality, reliability, speed, and support.

What to Do if You Are Afraid?

Shopify is the best ecommerce platform to build an online store.

If you don’t trust them, then where can you go?

If you know that you won’t preach their term of use and won’t sell something prohibited like firearms, and won’t use your Shopify site to publish any hateful content or do something shady, then you should not be afraid that they would shut you down.

But in case that you want more security when building your online store and you don’t want to give Shopify your full trust, then here’s something for you:

Can You Take a Backup of Your Shopify Store?

Yes, you can take a backup of your Shopify store in the form of a CSV file that includes information about your store such as products, customers, orders, gift card codes, discount codes, and financial data.

And you can download a backup for your Shopify theme.

You may take a regular backup every few days, and you can duplicate your store later if something wrong happens.

Or, if Shopify closes your store and you don’t want to use them anymore, you can then move to another platform like WordPress using the backup files.

It might take some work and time to do the full migration, but it is less than the time that you would spend on maintaining your store in case that you decide to build it right from the beginning on another platform as no platform is as reliable and easy to use for online stores as Shopify.

Conclusion – Shopify Is a Trustworthy Platform for Your Business

As you can see, Shopify can be trusted more than any other platform for building your online store if you want a platform that is easy to use, reliable, fast, and one that comes with great support.

Not to mention that the company keeps improving on their platform reliability, its integrations, performance, flexibility, and support.

Just remembering that big brands like Red Bull, Tesla, Nestle, and PepsiCo are using Shopify is a clear sign on how trustworthy Shopify is.

And remember that Shopify offers a 14-day free trial so that you can test it by yourself and see how powerful, reliable and easy to use it is.

I hope my article was helpful and insightful.

If you still have any question, you can ask me in the comments’ section below, and I will do my best to help you out 🙂